Scaling the Heights of Money Peace 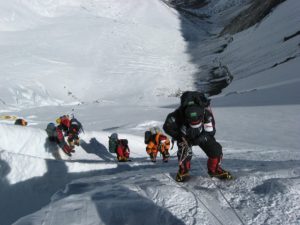 “Peace with money. Do you think it’s even possible?” a new acquaintance asked not long ago. For far too many of us, the mere thought of having any kind of composure, much less peace, about money seems akin to scaling Mt. Everest – a stretch just too far. And stepping into my friend’s shoes for just a moment, I understand why she’d asked.

Until about 10 years ago I could have been the one asking the question. I had sought a peace-filled life, but the one area where I continued to experience conflict consistently was with money. When I paid bills my shoulders crept up to my ears. Every conversation about money with my husband was fraught with tension. I wanted to experience the peace and harmony around money that I had in other areas of my life, yet I simply couldn’t seem to achieve it.

You would think a feeling of desperation would lead to making better decisions about money in order to relieve the anxiety. For me it was just the opposite. The more desperate I felt, the more I acted in haste.

Then, with the guidance of a money coach and mentor I began to take steps to gain more certainty around money. I began to realize that all my worrying had gotten in the way of authentic planning or taking action for the sensible use of my money. I started planning out my money as soon as I got paid. This led to greater clarity about what I wanted my money to do for me. I realized I wanted money to work for me, not have to work so doggone hard for it.

Next, I began to take small steps in the direction of how I wanted my money to work. Sometimes, it was just paying bills and not spending on extras. Other months I saw my way clear to save something for the future, or to contribute to a cause I believed in. I realized I didn’t want to be buying just to be buying. I wanted to feel satisfaction about my purchases. To know they were contributing to the quality of life I want.

Along the way, I noticed something that warmed my heart. At first, I was simply becoming more relaxed about money myself. Then I noticed there was less tension between my husband and me when we paid bills together. Slowly, I was coming to peace with money. It was at this juncture I realized I wanted to develop a coaching program to help others gain peace with money as well.

Subscribe to Receive the Make Peace with Money Workbook